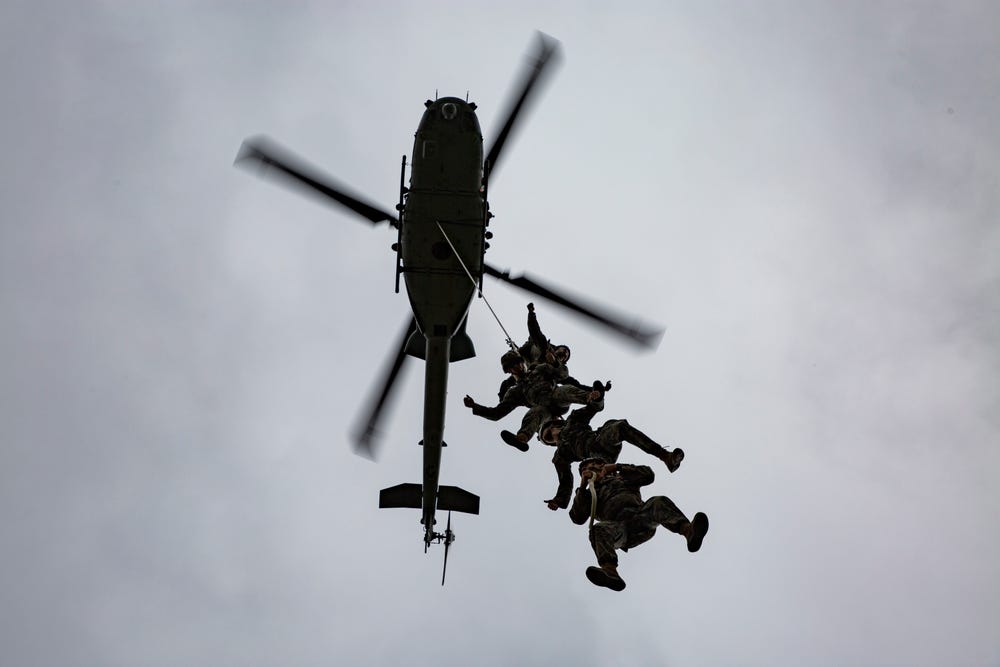 The United States faces a growing and very real threat from peer- and near-peer adversaries such as China and Russia — a geopolitical competition for technological advantage that will define the coming decades. Victory will be achieved not by identifying and investing in new technologies or developing larger and more complex weapons systems as has been often discussed, but by unifying and scaling efforts across the kill chain of acquisition.

We must empower acquisition offices to rapidly identify and assess commercial technologies in development, remove barriers to integration of new technologies into programs of record, mitigate threats of adversarial capital and influence on key technologies, and establish unity of command across all innovation efforts. We must impede adversarial efforts to gain access and influence to these critical technologies. Acquisition teams must be viewed as not just a buying center, but as a critical warfighting capability, and we must get them into the fight.

The Inspector General of the Department of Defense (DoD) recently released a report highlighting the top management challenges facing the DoD — with the top two challenges listed as “Maintaining the Advantage While Balancing Great Power Competition and Countering Global Terrorism,” and “Building and Sustaining the DoD’s Technological Dominance.” Leadership across the DoD and commercial technology sectors have highlighted the need for the DoD to drive innovation, understand and embrace commercial technologies, and to accelerate the pace of change. Elon Musk observed that the “foundation of war is economics,” adding that “in the absence of radical innovation, the U.S. will be militarily second.” These are the rallying cries for a change in how the DoD identifies, assesses, acquires, and ultimately integrates new, commercial technologies into battlefield capabilities.

Alvin Toffler famously remarked “change is not merely necessary to life — it is life” — perspective especially relevant in today’s rapidly changing technological battleground. This is an age of rapid global, technological advancement. The volume of information and capital changing hands increases every day while commercial technology proliferates around the world at an unprecedented speed. We have seen the impact of sophisticated cyber attacks, disinformation campaigns, and increasing tensions in the Middle East to name just a few recent challenges faced by the DoD. The 2020 House Armed Services Committee Future of Defense Task Force Report refers to the challenges faced as “existential” and cites the risk of relying on old models and processes to close the gap.

In the face of these calls for embracing innovation, becoming more synchronized with commercial technology trends, and speeding the development and integration of emerging technologies to the warfighter, we continue to conduct acquisition efforts in the same manner we have for decades, drawing many of the processes and procedures from playbooks developed for highly specialized hardware platforms with extensively defined and inflexible requirements, mass production with limited customization, and ever longer development timelines.

We are currently waging acquisition warfare without unity of command or a cohesive modernization strategy, leveraging processes that do not incentivize collaboration, and leaning on a workforce that is not organized trained or equipped for warfare. This is resulting in consistent cost and schedule overruns on large programs and creating bridges to nowhere for hundreds, if not thousands, of commercial companies working in Small Business Innovation Research (SBIR) and other research and development programs.

We are designed for inefficiency at best, and failure at worst.

Put simply, our acquisition community is not set up to be successful. As Christian Brose articulated in his recent book, The Kill Chain, the DoD has continued to take a platform-first, hardware-centric approach to capability development. This is reinforced by program managers, Congressional funding processes, and the sheer difficulty of killing a failing program in the DoD. In the face of the aforementioned existential challenges faced, the DoD is continually stifled by overly bureaucratic processes and regulations, inflexible funding requirements and technological literacy gaps in the acquisition and appropriations systems, and a rapidly changing, difficult-to-navigate ecosystem of innovation hubs developed across the DoD.

Many of these challenges are symptoms of legacy, often Byzantine, processes. Efforts to embrace and effectively wage acquisition warfare are stymied by challenges such as:

We cannot just throw more money at a broken system and expect it to deliver new results. We must change.

If we continue to simply try and force more through our current approach, we will fail. Our adversaries continue to adapt, and commercial technology development rapidly outpaces DoD process capabilities. China has made significant gains in recent years, Russia continues to inject complexity and chaos into national security challenges, and we face countless threats from non-state actors across the globe. We’ve seen successful disinformation campaigns, substantial, sustained investments in AI and quantum, and an increased willingness to challenge the territorial integrity of neighboring countries, to name a few.

The DoD struggles to balance speed with security, and fails to understand the drivers of commercial companies, resulting in a desynchronization of priorities and efforts between the DoD and the commercial technology developers they court. Checklist-driven security requirements, confusing and fluctuating compliance requirements, and expectations for commercial companies to make large investments of private capital just to get a ‘ticket of admission’ for DoD opportunities serve as clear examples of misaligned efforts. Additionally, as a result of limited insight into sources of capital and supply chains, DoD organizations are still procuring and deploying technologies sourced from, made by, funded through, or otherwise compromised by our adversaries. To continue in this manner is nearly guaranteed to exclude the DoD from the ability to access, collaborate with, and ultimately implement many technologies for which the state of the art is now determined outside of the national security industry. To continue in this manner will result in lower quality capabilities being developed for warfighters.

These challenges impact collaboration efforts between DoD, DHS, the IC, DoE and others — and create nearly insurmountable barriers to technology collaboration with key Allies and partners, meaning everyone is building ‘their own’ capabilities precisely where tight integration will be necessary to most effectively bring our Alliance structure to bear on the battlefield.

There are clear steps to take to empower the Department of Defense to win Acquisition Warfare.

It is no secret that transforming the FAR into something that is conducive to our current reality is a significant effort, and fraught with challenges. However, that should not impede near term activities, nor does it mean that no change is possible. Clear actions should be taken across the following lines of effort in order to position the DoD for success:

1. Establish clarity in leadership of and empower the workforce of the defense innovation community to create a foundation for scaling impact

2. Define and implement clear transition pathways for innovative technologies and capabilities and communicate on progress to focus efforts and demonstrate ROI

3. Increase the resiliency of the technology innovation base by implementing technology capabilities to identify and impede adversarial efforts to disrupt U.S. national security.

Of the countless actions to be taken, the above serve to immediately create focus and structure for the scaling of acquisition warfare efforts, and will provide the foundation needed to scale capabilities. Additional strategic opportunities for the DoD — such as creating software baselines with Allies and partners, the sharing of training quality data with providers, and the regulations around DoD funding — exist, but first steps must be taken expeditiously. We must take the technology threat from adversaries like Russia and particularly China seriously, and wage acquisition warfare.

Tyler Sweatt leads Growth at Second Front Systems. He is a Technical Advisor at Pallas Advisors, a member of the National Security Advisory Board at CalypsoAI, an advisor at GovCity and an advisor at Outland. Previously, Tyler served as the Head of National Security at CalypsoAI, founded and sold technology advisory firm Future Tense, and led the emerging technology and security practice at Toffler Associates. A graduate of the United States Military Academy at West Point, Tyler is a former U.S. Army officer.

Enrique Oti is the Chief Technology Officer at Second Front Systems and an Entrepreneur in Residence at Harpoon VC. Previously, Enrique served 23 years in the U.S. Air Force as a Cyber Operations Officer and a Foreign Area Officer for China. He co-founded the Defense Innovation Unit (DIU), founded and commanded the software development unit, Kessel Run, served in the US Pacific Command China Strategic Focus Group and commanded an Intelligence Support Squadron. He is a graduate of the US Air Force Academy, Joint Military Intelligence College, and Zhejiang University.

Jason Knudson is the Vice President of Product Development at Second Front Systems and member of the board at Catalyst Campus for Technology and Innovation and the Center for Technology, Research, and Commercialization. Prior to his role at Second Front, he served in the U.S. Navy in enlisted and officer roles as a cryptologist, submarine nuclear officer, and as a Special Warfare Combatant Crewman (SWCC). Defense innovation positions include Chief of Staff of the Chief of Naval Operations Rapid Innovation Cell (CRIC), 7th Fleet Innovation Officer, and Project Manager at the Defense Innovation Unit (DIU). He is passionate about driving innovation into the defense bureaucracy as a matter of national security.

What is the NIST Risk Management Framework?

From On-Premise to Cloud: The DoD’s Cloud Coming of Age